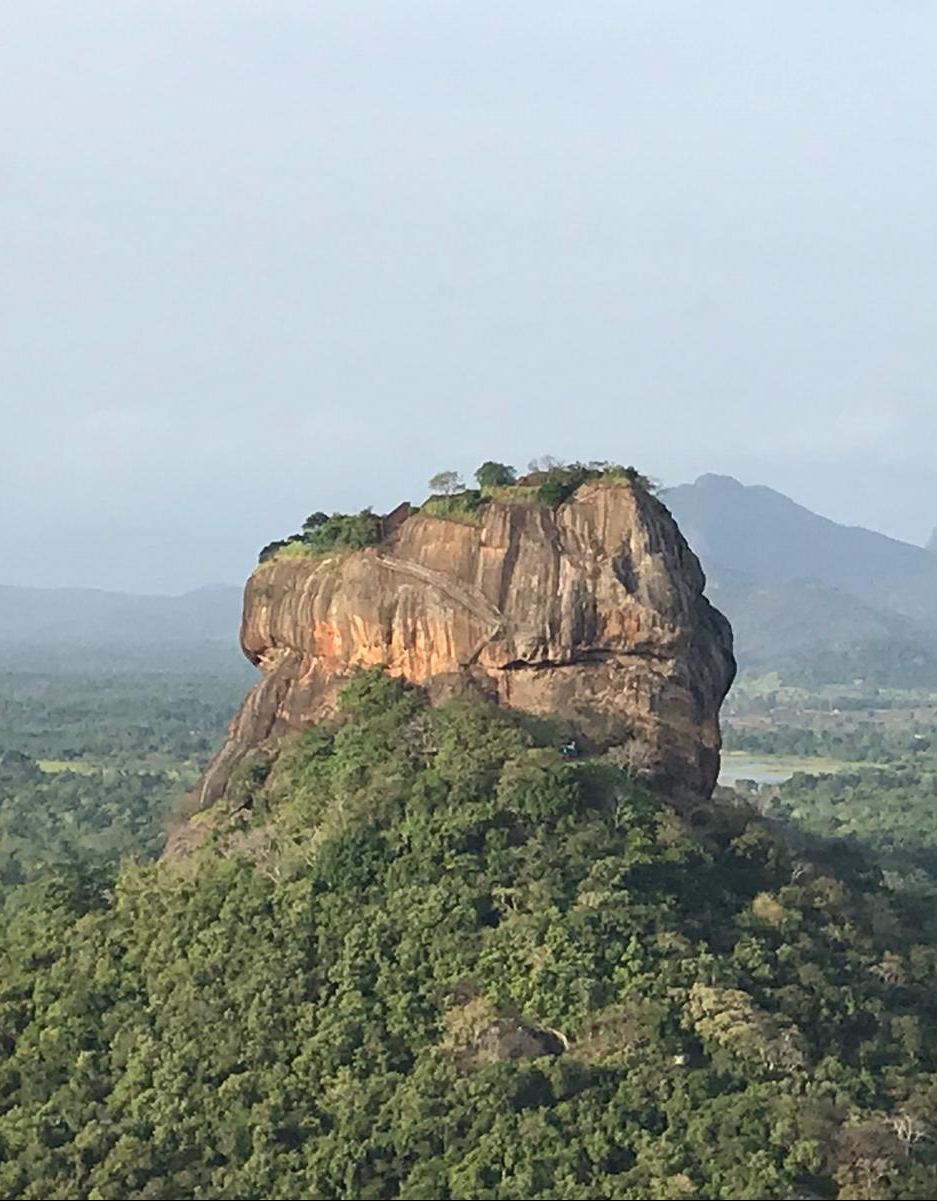 It’s 3.45 a.m. and I’m sitting in the dark garden of my hostel in Dambulla. I’m waiting on my tuktuk driver to bring me to one of Sri Lanka’s most magnificent places to visit: Pidurangala Rock.

I might’ve had one hour of sleep, although that’d be a generous estimation. The alarm on my phone had not only woken me up, but also some poor chaps with whom I shared my bedroom. “I’m soooo sorry,” I had to whisper, my bed squeeking as I climbed out of the top bunk.

Let’s put it this way: waking up early is not something I like doing. In fact, it’s one of the things I detest the most in life, like waiting in line or getting ripped off by my surf teacher (which actually happened, but that’s another story). But today is a special occasion, because watching the sun rise over Sigiriya and to watch the Lion Rock awaken, is supposed to be one of the prettiest sights this idyllic island has to offer.

To be fair, I’d have wanted to climb the Lion Rock as well, but it’s one of the most visited places in Sri Lanka, which means huge groups of people, a waiting line – which, as I just mentioned, I don’t like – and a price tag that goes way beyond what it’s worth: the Lion Rock costs €25,- , while Pidurangala Rock is only €3,-.

But the main reason I chose to visit Pidurangala instead of the Lion Rock was that the locals I spoke to, told me to go visit Pidurangala. One of those locals was my driver, who came to pick me up at 4.00 a.m., exactly on time.

By the way; I don’t want to bash The Lion Rock. It’s obviously still one of the most impressive sights to see and if you believe it’s worth going there, you should definitely do it. 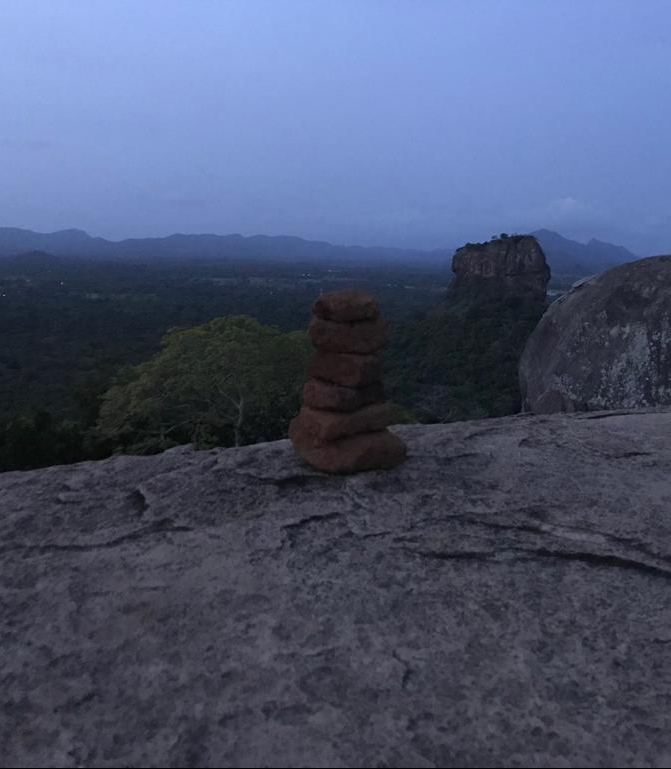 It’s the first time I see the Sri Lankan roads during night time. But to be fair: I can’t see anything. I’m surprised to see so many people already on the road, although that’s only the case on the main roads. When we take a right turn straight into the jungle, the traffic goes to less than zero. Only me, my driver and nature are left. At some parts of the road, he has to drive incredibly slow. It’s full of potholes, some are huge; big enough to fit an entire tuktuk in it.

I’m lucky that my driver has ‘insane skillz’, he drives past the holes like they’re not even there. As he makes a couple of slaloms, he tells me that the area we’re passing through is stunning. I can’t check that, because our surroundings are still conceiled by a murky blanket, so I’m going to have to trust him on this.

Only me, gloomy surroundings, the top of the rock as my goal and the torch on my phone

After passing through the jungle and the bumpy ride, we arrive at a parking space at the base of the mountain. My driver parks his tuktuk and points to the top: “That’s where you need to be. I’ll wait here for you.” He would’ve joined me back in the day, but he’s not that fit anymore; he’s a little older and has a limping leg. He hobbles to one of the other drivers who’s already arrived. I leave him behind and start my ascension.

The mountain is volcanic and the climb is quite a harsh one if you haven’tbslept more than an hour. The first part consists of steps which are lighted, mostly. At some points it’s still a pitch black darkness that greets you, so at certain parts I need the torch of my phone to guide my to the top. I mainly focus on my feet to make sure I don’t trip or worse: to step on some animal. Exotic snakes and spiders aren’t uncommon in this area.

Something I forgot to mention, is that at this point of my trip, I’ve lost my shoes somewhere in my last destination. I’m pretty sure theyré still waiting in front of my previous hostel in Kandy. That’s why I’m wearing nothing more than my flipflops at the moment, which, in hindsight, I wouldn’t recommend to anybody. The first part of the hike is still easy and quite accessible, but after a while, the steps become a terrain of pointy, tall rocks and you really need to put in some effort to get on top. A couple of good hiking shoes will help you enormously.

As I keep on moving, I suddenly hear something swish in the bushes. I benumb, for I’m all by myself. If it’s something dangerous, I can only hope there are some tourists that will soon pass me by. I point my torch towards where I heard the sound coming from. I scare up, as I feel a pelt rubbing against my leg. I point the torch at my leg, only to discover it’s just a wild dog. It looks at me, curiously, as if it thinks I have some treat for him in my pockets it so desperately needs.

Of course you always have to be careful with wild animals, but wild dogs aren’t a big threat, mostly. Dogs are very common on Pidurangala Rock anyway, especially on top of the mountain, I would later discover. As I move on, more curious dogs start following me.

Right before the top, I arrive at a statue of a buddha lying down. It’s 12,5 meters long and with his half-opened eyes, he must be in Nirwana as I walk past it. The statue, however, is broken. In the sixties, the head was teared down and stolen by hunters. It has been renovated, but they used bricks for it, which makes the difference between the original statue very obvious. This has been done on purpose to remind people that, when not preserved, historic monuments will rumble or be destroyed by people with wrong intentions.

This place, where the statue of Buddha lies underneath the top of the rock, is the perfect spot to rest a little, because the steps are quite tiring. You can already see th Lion Rock from up here, though it’s still hiding in the darkness under the stars. With my pack of wild dogs around me, I look into the distance.

When I try to move on, there seems to be a blockade, for the rocks are too steep to pass, is my first thought. Then, I hear a guide with two tourists behind me. He makes a gesture that I have to go on if I want to reach the top. I let them pass and follow them. Because the flipflops aren’t giving me any grip when I try to climb the rocks, I take them of and continue, bare feet.

The climb has now changed drastically into an obstacle course. At some parts it’s even quite like rock climbing. Especially the last rock is challenging, where I have to climb on one rock to make a big step onto the next one. The guide I followed luckily shows us how to get past this part. 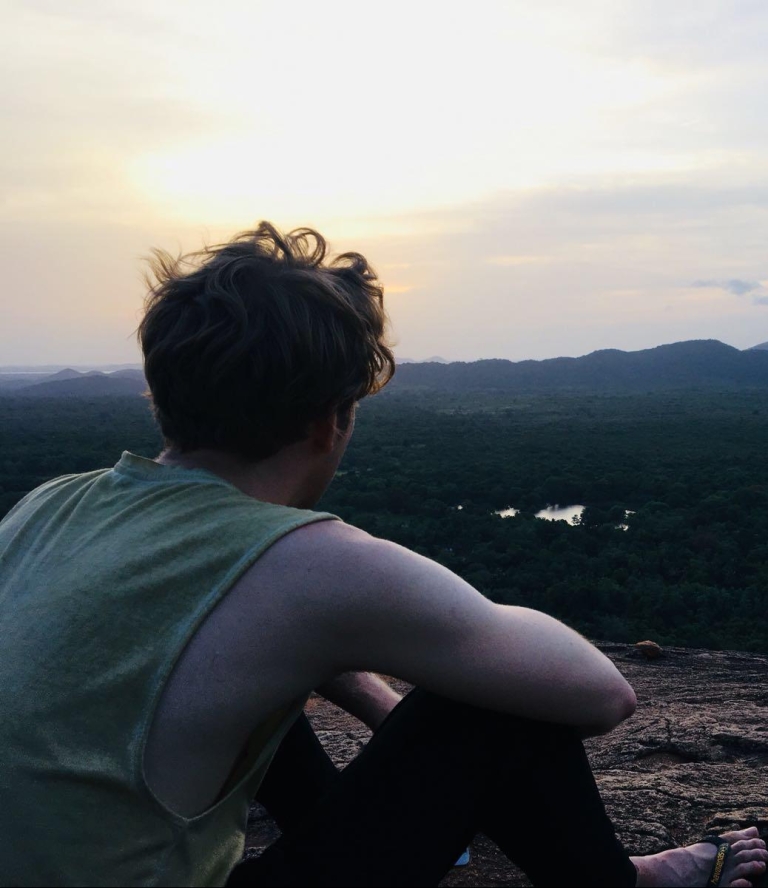 A panoramic view that stretches into eternity

Doing all this only having had one hour of sleep, is exhausting, to say the least. But as I reach the top, I realise it’s been totally worth it. A view that doesn’t seem to end. Lines of trees forming one huge jungle, reaching until the end of the world, it seems.

As time passes, the landscape becomes even more visible and starts to stretch even further. I don’t believe in enchantments or other spells, but I can’t deny that this was magical. Like a play that’s about to start, the spotlights slowly light up the stage, as nature plays her routine part. The sky changes colours. Starting at pitch-black darkness, it turns to a deep, dark blue, to later flow into purple, red, orange and yellow and light blue when the sunrise is over.

Even though the sky is enchanting and the Lion Rock is resembling an impressive, strong body that tops the landscape, that isn’t what stays in memory. It’s the panoramic view over the endless jungle, stretching over mother Earth, hiding her biggest secrets yet to discover by human kind, as the guide points out that the jungle houses a lot of medicinal plants of which we don’t even know their existance yet.

As I already mentioned, there are a lot of dogs on top of the rock. How they got here, is still a mystery to me, but they seem to do just fine. A micro-forest on top of where used to be a buddhist stupa is their home. What’s incredible to me, is that they see this every morning as they wake up. The stars, the darkness turning into a palette of colours, only to watch over the mighty forest down below uncover the blanket of the nightfall; like kings and queens of the jungle. 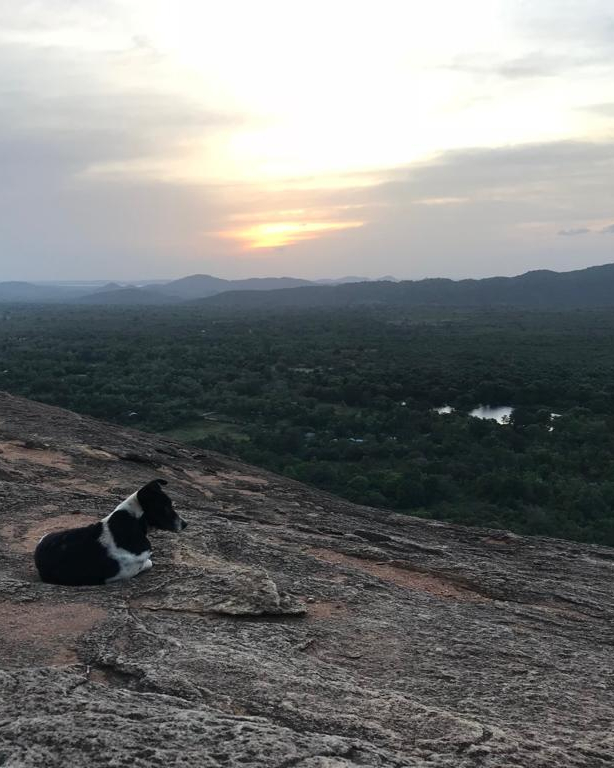 Although this place isn’t as popular for tourists like the Lion Rock, Pidurangala isn’t entirely unknown and the brighter the morning becomes, the more crowded it becomes; a sign that it’s time for me to leave.

The guide that helped me up the mountain, points to some parts of the rock as we’re descending. He tells me that people lived in this little cove, presumably buddhists. Buddhists used to roam this mountain, after they were removed from the Lino Rock in the fifth century, when king Kasyapa turned that place into his palace.

As I driveback to my hostel, I see that my driver was right when we drove down here during the night. The place is beautiful. Standing by a small canal next to the road are colourful birds. At the other side are monkeys running and jumping around in the trees, while a crocodile, just about ten meters away from them, is sunbathing with its jaws wide open.

Ten minutes later, we pass by a little pond, just by the road, where an elephant is washing itself. I ask my drier to stop the tuktuk, so I can take some pictures of it.

Taking in water with its trunk, it sprays it over its head, like a self-made fountain. It resembles something I’d normally see in a movie scene.

My driver has got out of the tuktuk as well. He’s standing by some grass next to the road, making a gesture I should see something. He points to a small plant. I bow down, wondering what could be so special about this seemingly unimpressive plant. “Touch it,” he says. I let my finger slide over it, and as I do, the plant starts to retrect itself. My driver laughs. “We call it a sleeping plant,” he says. It’s officially called a mimosa. It’s the first time I ever touch such a thing and even though it’s something so small, it does give a certain thrill. Especially when I realise that something like this could grow in a green house in the country I come from, with a hole bunch of temperature management and moisturizing machines, but here it just grows by the side of the road.

And that’s Sri Lanka, if you ask me. You go to a place you expect to see something and it always brings you so much more you could ever dare to dream of. This is only my experience at Pidurangala, but there are so many more places where I had this exact same thing. You’re constantly being rewarded with so much more that you think you deserve.

One thought on “Mounting the gloomy top of Pidurangala Rock”