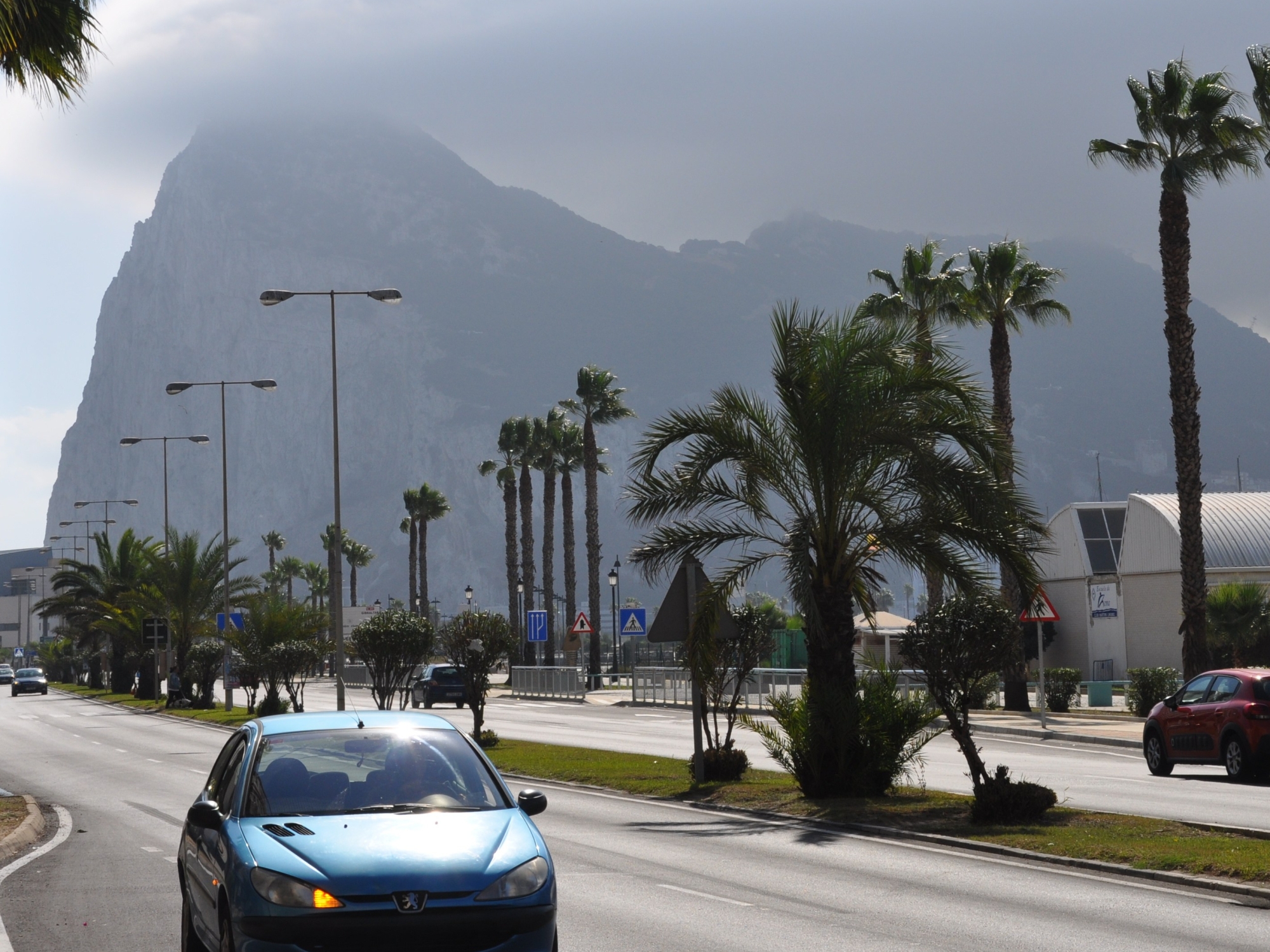 While Gibraltar seems to be a shining city on the hill, the outskirts of ‘the Rock’ are something completely different. The Spanish village La Línea de la Concepción is one of the poorest places in all of Spain, Andalusía, but it’s situated right above one of the biggest economic hubs of the entire Iberian peninsula. If you want to witness one of the most polarized places in Europe, a place where the rich and the poor are even segregated by a land border, this is the place where you can see this difference very prominent.

Let’s say you live in La Línea, the Spanish village that’s multiple times been called the poorest place of Spain. You wake up every morning in a town where crime rates are high, incomes are low and on the streets, there are gangs who thrive from an illegal cigarette-smuggling business from Gibraltar to Spain. On top of that, 35% of the people here is unemployed. Every day when you open the blinds of your window, you can see the prominence of wealth: the cloudy Rock of Gibraltar dominantly rises over its environment. It’s the only reason why you still live in this village, because that rock right there is the only place where you can get paid well in this region.

13.000 Spanish citizens cross the border to work in Gibraltar daily. It’s an incredibly prosperous place, for it’s the biggest economical engine for Andalucía right after its regional government itself.

Of course, Gibraltar doesn’t belong to Spain; it belongs to Great Britain. However, Spain begs to differ. Ever since the British annexation of the peninsula in 1713, the Spanish throne has never been able to let it go. Wars have been fought and the border has been shut in the past by Spain, but the Gibraltarians have always found their way to remain independent from Spain. For example, when Spain shut the border in 1966, Gibraltar imported their goods from Morocco instead.

When I was here, I stayed in an AirBNB in La Línea. The reason for that is that the price you pay for an accomodation in La Línea is much lower than what you’d pay in Gibraltar (I’m talking about less than €10,- a night in La Línea compared to €34,- a night in the cheapest AirBNB I could find in Gibraltar). That’s why, if you don’t have a lot to spend like I had, I’d definitely recommend doing this as well.

But what’s worth way more to be staying here, is that you’ll get to know the region much better. You’ll actually see the demographics at play by the people representing them and you’ll see that behind all this wealth from the Rock, there’s a huge group of people barely getting round and for whom nobody’s taking care of.

It’s an aspect that makes crossing this border so much more interesting. Not only do you see cultural differences (from Spanish tapas to British fish ‘n’ chips) which is common when you enter another country, but also the absence of poverty in Gibraltar versus the presence of it in La Línea, is staggering.

Likewise, Gibraltar is extremely reliant on its periphery. You see, normally, a city is built up from a rich centre, a semi-periphery and a periphery (the outskirts). The centre however cannot exist without its periphery and vice versa. But here, it’s as if the city centre is being cut off by a land border from its periphery. A border that’s been an international debate for more than 300 years.

Finally, this border stands out compared to other borders, because to cross the border, you’ll have to cross the runway of Gibraltar Airport. It’s quite fun if you’ve never walked down a runway before and every now and then, the gates to the runway close and you’ll just have to wait twenty minutes for an airplane to land or to take off. It’s like waiting for a train to pass, but instead of a train, it’s a plane (wowzers!).

A woman is waiting for a plane to pass. 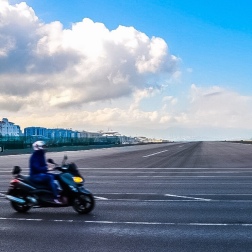 Gibraltarians on the street: “unwanted Brexit stirs up identity debate”

Anyways, the Gibraltarians are an incredibly open people. They know they’re that shining city on the hill – or Rock – but they’ve also been victim of geopolitics between two big European countries. “Our people have suffered,” a man in a shop tells me when we start talking and he brings up Gibraltarian history, leading to a conversation about Brexit.

I’m curious about this subject and decide to also speak to a woman who owns a boutique across the street. She says that Brexit appears to have stirred up the identity debate. “I feel European and I wanted to stay in the EU; we all did. 96% of us voted to stay in it, but we weren’t heard. Now we have to wait and see.”

When I ask the man in the shop if he’d be willing to give up his Britishness for staying in the European Union, he refuses. “I feel Gibraltarian. One step above that, I feel British and only after that, I feel European. I don’t condone the decision of the UK, nobody here does. But we’ll all have to deal with it, unfortunately.” Talking to these people made me realise that Brexit will always be a fascinating subject to me. If you feel the same and if you want to listen to the stories of people directly being affected by this political subject, this is the place to be.

But talking about this can be quite tiring, for it’s not a cheerful subject at all for most people living here, so I decide to climb to the top of the rock instead. It’s not a long way up, for most of it is just sitting in a cable cart and waiting for it to arrive. Once I’m there, I’m greeted by monkeys, the only wild monkey population of Europe.

Now, I often find monkeys to be entertaining, but you have to keep in mind that these are wild, so they might do something unexpected. I’m talking climbing on top of everybody who’s there and trying to steal things out of people’s bags and pockets. Therefore, my advice would be to be aware of that: they’re cute, but they can also be quite annoying.

Furthermore, the monkeys have a certain symbolism around them. According to the myth, the Brits will rule Gibraltar for as long as there’ll be monkeys on top of the rock. That’s why when the population was under thread in 1944, Churchill imported as many monkeys as possible from North Africa to ‘keep Gibraltar British’.

But all the monkey business aside, the view up here is one you definitely don’t want to miss when you’re in Gibraltar. You can see the entire Campo de Gibraltar and on the other side, you’ll see the deep blue waters of the Mediterranean sea. It’s a stunning sight to behold.

As I climb down the rock and walk back to my apartment in La Línea, I can’t help but feel conflicted about this place. In a way, there’s a huge division between the rich and the poor, but both sides aren’t really to blame for it, because it’s the countries the places belong to that have screwed up this region when it comes to the huge polarization. Then, there’s the Brexit where the Gibraltarians are being dragged into by the U.K., the country they feel culturally aligned to but also the country that’s essentially stabbing them in the back economically.

And all that on such a beautiful, almost idyllic spot in the world. Underneath the beauty of it all is an internal conflict going on that almost seemed to be over, but has been stirred up yet again by recent political developments from one of the two countries always fighting about this region. It’s something you wouldn’t see if you wouldn’t talk to the people about it, but it’s there. Frustration, anger, disbelief and a feeling of betrayal.

This must’ve been a long read, so my apologies for rambling on for this long. Thank you very much though if you were able to stick around after all this time! I’ll be signing off now, so…