Yesterday, I arrived in Kandy, where I met two amazing people in my hostel – later to be joined by the twenty-year-old stoners Algy and Will. We have breakfast with the five of us and part ways when the two British boys change their plans of the day and rather wander about Kandy on their own.

We meet up with Gabe, who’s waiting at the bar we drank yesterday. He’s smoking a cigarette and drinking a cup of coffee on the terrace, while rays of the morning sun are shining down on him. The three of us join him with a cup of coffee as well.

Now, there’s something you should know about me. I absolutely love coffee in all its forms and ways – I just can’t get enough of it. Coffee in the morning, coffee during the day and coffee after dinner; coffee all day long. If it wouldn’t keep me up at night, I’d probably have a cup of coffee on my nightstand as well, sipping it while reading a book about Brazillian coffee beans.

But Sri Lanka isn’t famous for its great coffee. While the tea is delicious – and I actually mean PHENOMENAL – the coffee is definitely not their specialty. They basically make their coffee the way they make their tea, which results in a sip full of sediments everytime.

So it’s not perfect, but as I’m here, I somehow grew accustomed to it pretty easily and after a couple of cups, it started to grow on me. Or I’m just the biggest coffee addict who’s only drinking it for the kick; I don’t know, you tell me. *Takes a sip of coffee*

Buddha and the snake-charmer

Anyways, we make a plan for the day. We want to see the big Buddha statue on top of the hill, visit the Tooth Relic in the evening during the ceremony and visit a special bar called Helga’s Folly. We decide that during the rest of the day, we’ll just be strolling around town.

Gabe mentions he just watched a snake-charmer with a little monkey on the street. We want to check that out first. As we walk up to the spot Gabe told us about, we see a small man sitting with a monkey on his arm, and a couple of bags around him. He’s making his cobra come out of a basket – though not vertically, like in the movies, but it’s just lying there on the floor.

We are stoked at first, but just so you know: I don’t condone these kinds of behaviour towards animals. I think it’s wrong and it should be forbidden, but I’d never seen this before, so I was curious enough from a journalist perspective to go and see it.

Josh goes all out: the man puts the monkey on his lap and lets him touch the snakes. He even gets a python in his neck, which Josh took off of him the moment he felt its muscles tighten. Later, he told me he was just in time before it’d have tried to choke him out. Another mentionable moment was when the cobra tried to attack the group of tourists surrounding the snake-charmer. The snake-charmer was just in time to grab it by its end and pull it back in. 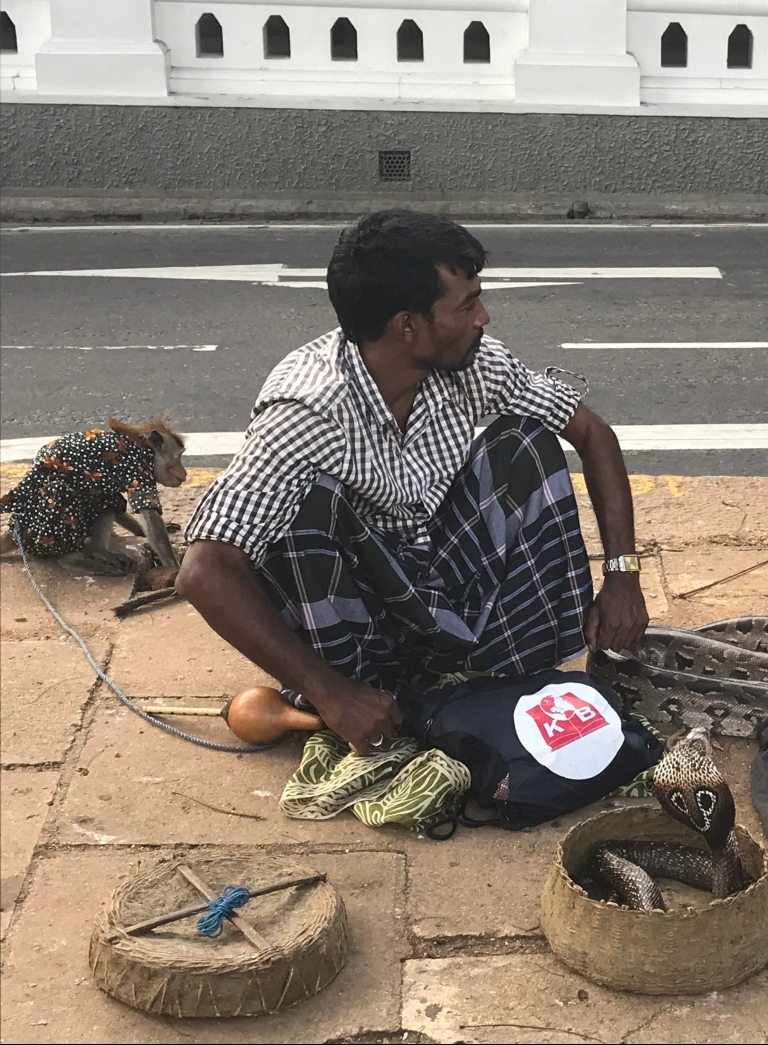 We leave the man be, but he doesn’t want us to go before we pay him. We never wanted to hold all his animals in the first place, but he just put them in our hands anyway. When we walk away, he gets upset with us and we get into an argument. Eventually, we pay him anyway, but far less than the full price he asked for.

We get us two tuktuks and drive up the hill towards the huge buddha statue. As we do, we pass by the two stoner kids along the way, Algy and Will. Very coincidental, we team up and visit the statue altogether, which was a blast. 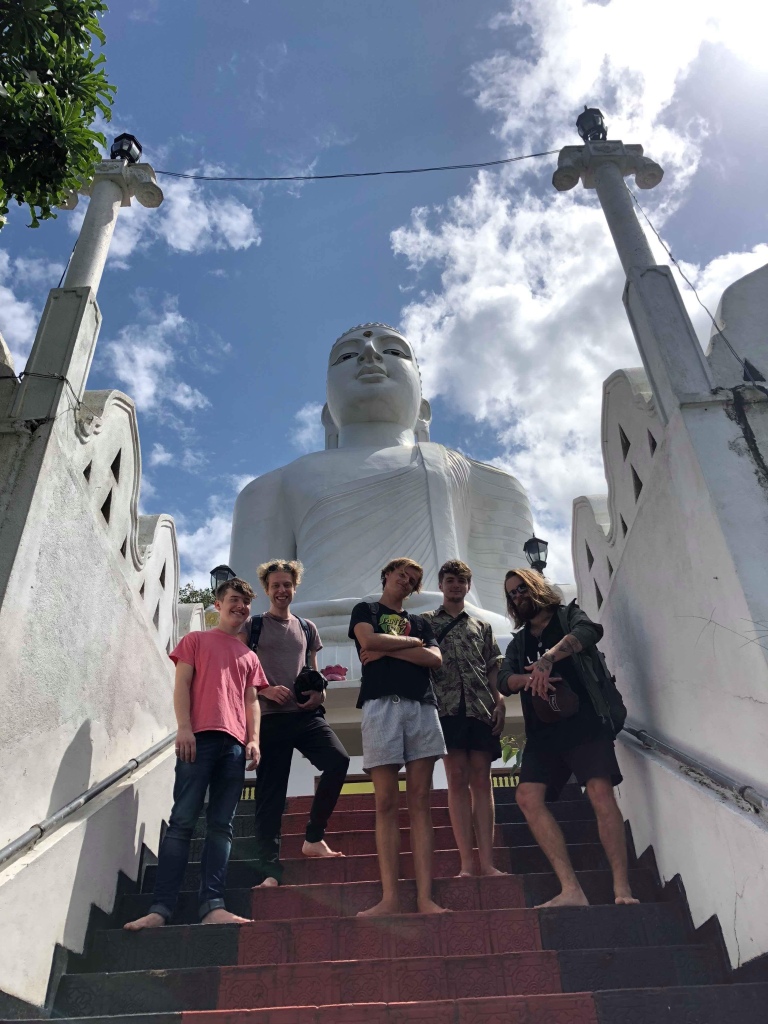 After that, the boys and us part ways again, and Josh, Rachel, Gabe and I go to visit Helga’s Folly. It’s a bar on top of one of the hills that surround Kandy, which has a kind of eerie vibe to it. The place is a dark horror house, full of strange photos on the walls, lots of candlelights, dirty mirrors and old jazz music playing from an old record player in the corner. All this combined may make one think about something like the Adam’s Family.

But alongside the horror elements, there were also a lot of buddhist/hindu statues. This, mixed with the Adam’s Family-elements, gave the house a really unique ring to it. The only thing missing, are inconvenient jump scares from people in costumes – which I think is a good thing, to be honest.

Check out the video below for a full impression of what it looks like.

We drink a beer at Helga’s Folly and then go downhill to go get something for dinner and something to drink as well. At the bar we visit, I see how the predominantly white tourists and locals are being separated because of the local rules I discussed in my previous post. It’s segregation at play, Josh remarks here. We have some drinks here until the ceremony at the Tooth Relic begins. Gabe decides not to join us there, because he’d met up with someone else, so it’s just the three of us.

Trying to get into the Tooth Relic Temple

Now, according to the legend, Buddha’s tooth is inside a little box in this temple. Because the box is closed, I obviously couldn’t check, but that’s what makes this temple one of the most holy places in the world for a lot of buddhists.

Getting inside the temple wasn’t easy for us, though: the clothing rules are strict and if you’re showing only the tiniest bit of knee/shoulder, you won’t get in and sadly these checks are more strict if you’re a woman. This wasn’t playing out great for us, because Rachel was showing too much arm, so she tied Josh’s pants around it, but now Josh was showing his knees. While military guards were staring us down, there were ventors around us trying to sell us clothes to wear so we could get inside the temple. It was quite a stressful situation, but luckily, Rachel suddenly pulled out another piece of clothing to wear so we were able to enter the gate to the gardens of the temple.

Our next obstacle though, wasn’t far away. Now, we were asked to take off our shoes an put them in a locker, but the men at the lockers outside of the building weren’t very friendly and they kept stressing us out – especially Rachel at this point. We got a little upset, but don’t get into too much of an argument. “Peace and serenity, bro. Peace and fucking serenity,” Josh keeps telling me, which cracks me up even while I’m thinking about it much later.

During all this, it’d been pouring rain, so we’re soaked at this point and we really want to get inside now. We’d expected buying our tickets inside, but inside we were told to get our tickets somewhere else – all the way back to the entrance gate of the temple. That’s quite a long walk, especially under these weather conditions. Rachel is fed up at this point, so Josh and I decide she could take shelter there while we’d go back to get the tickets.

After running up and down to get our tickets, we hurry back to the temple. The stones have become slippery though, and Josh tells me at some point to watch out, because he nearly trips. A normal person would react to that advice accordingly, but I somehow didn’t really process it, so while walking down the steps, I face my destiny and I slip and slide down. Luckily I’m able to catch myself without too much trouble, but it must’ve looked worse than it really was, because Josh scurries towards me. “Are you okay, bro?” he asks me immediately. “Yes man, don’t worry. Peace and serenity.” He laughs while I get up.

We FINALLY get in

When we finally enter the temple, there are some things that shocked me. Don’t get me wrong; it looked absolutely beautiful and I could definitely see why people would come here to pray. There’s also traditional music being played at the entrance, which really adds to the ambiance of the place. But the elephant tusks that are being used as decoration, made me feel uncomfortable – even though they say these tusks came from elephants who were treated with much respect and had a great life.

We watch people pray and we check out the rest of the temple. Because it’s too busy, we assume we’re not allowed into the room where the tooth is supposed to be in, so we skip that. After an hour or two, we all have to go to the bathroom, so we get out again. Later, we heard some British tourists did get in to see it. They weren’t very impressed, though, because it was being preserved inside a box which wasn’t to be opened.

So we need to pee, but there’s no bathroom around. We keep walking the gardens of the Tooth Relic and nowhere can we find a place to fulfill our needs until we ask about five different people who eventually get us to a place that’s so remote, nobody would’ve guessed it. One man sitting in a booth leads us the way through the muddy, grassy grounds. We have to use the torches on our phones to light the way and to make sure we’re not stepping into any weird things. We get there eventually and after this endeavour, I can tell you that I haven’t been more relieved ever than at that given moment right there.

We end the day by getting us some alcohol and drink it at the hostel. We meet again with the stoner kids and some other people in the hostel – some of them I’d met in Colombo already, so that was quite coincidental as well.

We have one last night together, because the next day, I’m leaving for Dambulla and Rachel and Josh will have to get up very early in the morning to drive all the way up to the Lion Rock in Sigiriya. It’s sad that our time together was so brief, but I’ll cherish it always, for it’s been one of the most fun times I’ve ever had with people I’d only met a couple of hours before.

The next day I’m waiting at the Kandy train station again. Gabe and I are meeting up to go to Dambulla together. And so the journey continues…

3 thoughts on “Snake charmers, a horror-themed bar and seeing the tooth of Buddha; a vibrant day in Kandy”